Many of you are probably aware that within the browser one can launch the default mail client by having a user go to a URL that looks like 'mailto:test@test.test'. A prompt will appear asking the user whether to switch applications, once a user agrees, the application will run.

In my case, Outlook is the default mail application and as you can see in the image below certain parameters are sent to the Outlook executable. 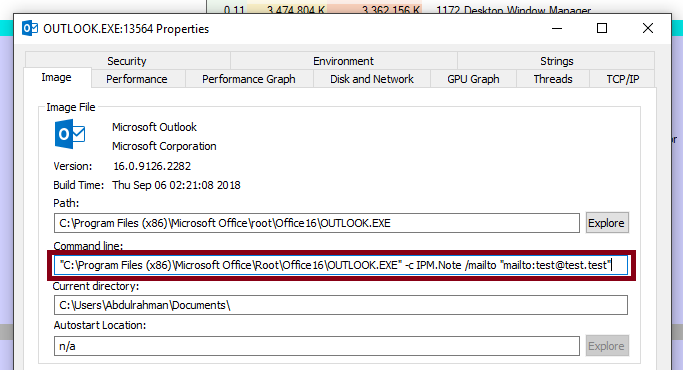 So there is user tainted string being passed as a parameter value, clearly something could go wrong here. But the question is - What other external-application-launching URI schemes are there?

The Most Convenient Protocol

When looking at the registry we can find all the registered custom protocols we can use. Within 'Computer\HKEY_CLASSES_ROOT\' we look for folders which contain 'shell\open\command' as sub folders. For example, I found that 'ms-word' has such sub folders.

So if we look at the values of 'Computer\HKEY_CLASSES_ROOT\ms-word\shell\open\command' we find 'C:\Program Files (x86)\Microsoft Office\Root\Office16\protocolhandler.exe "%1"'. This means if we have a user click on an anchor tag that points to 'ms-word:test' the following will occur:

I am too lazy to look at all the possible command line parameters we could throw at 'protocolhandler.exe' to achieve something useful. So let's take a look at a lower hanging fruit.

Well, this is very convenient! A URI scheme that passes user tainted arguments directly to 'WScript.exe'. In case you don't know: "Windows Script Host provides an environment in which users can execute scripts in a variety of languages that use a variety of object models to perform tasks." Let's see what happens if a user navigates to 'wshfile:test' from Edge. First, we get a prompt asking to choose the default application that should handle this URI scheme. By default, as we've seen in the registry, 'Windows Script Host (WScript.exe)' is the handler. 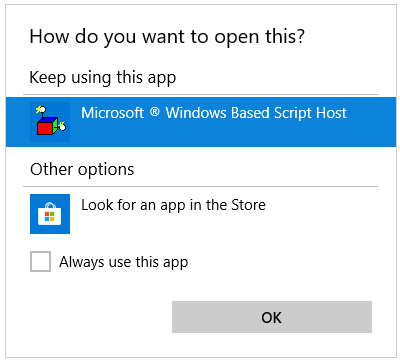 What 'WScript.exe' does is it attempts to execute the file located in the path you pass to it. In this case, it tried to locate 'C:\WINDOWS\system32\wshfile:test' but it does not exist. So what can we do about this? Can we somehow drop a file that's named 'wshfile:test'? Nope. So what can we do?

The first test here is obvious: path traversal. I simply navigated to 'wshfile:test/../../foo.vbs', pressed OK on the prompt and then:

Awesome! We can now point to any file in any directory and so long as we can drop a file in a predictable location, we will have RCE. But that is easier said than done, looked like most if not all cached files from Edge go into a salted directory location. In other words, we could plant files but we can't predict their location. This is where I remembered an awesome article written by Matt Nelson. In this article he points out that Windows comes with a signed VBS located in 'C:\Windows\System32\Printing_Admin_Scripts\en-US\pubprn.vbs' that suffers from 'WSH Injection'. I highly recommend you read it, it essentially shows that the specific VBS file accepts 2 arguments passed to it and these arguments can be crafted as such that it would trick the VBS script into executing arbitrary commands. But! This was fixed already and the only affected computers are the ones that haven't updated yet. So that's not good enough, the article mentions that many more such cases exist but did not specify, thus begins my search for a similar case.
I started by looking at every single VBS file I could find in Windows and then looking if it accepts any parameters. I found one located at

This specific script takes in a few arguments and passes them into a powershell.exe shell execution without filtering it, allowing us to inject arbitrary commands. If you look at line 36 of 'SyncAppvPublishingServer.vbs' we see:


And we can influence the value of 'syncCmd' but not only that, Edge also does not sanitize quotation marks, so we can pass as many parameters to 'WScript.exe' as we want. Again, conveniently this powershell will run hidden as indicated by '-WindowStyle Hidden' which makes this a perfect WSH injection vector.

The problem in this version is that this specific folder name depends on what windows build the user is on. In my OS build 17134 the folder contains '10.0.17134' if you were on a different OS build it will be different. As far as the other things, there is little to no documentation of how they are determined. This is the only article I found about it with any useful information.

I made the argument in my report that all we needed was a stepping stone vulnerability in Edge that allowed us to detect local files (not read them), I was not able to find such a bug but hypothetically it can popup at any moment. On top of that, we don't have to guess the entire folder name char by char. In Windows folders come with a shorthand version called "DOS PATH" and so guessing the DOS path version of the folder location is more than possible.

Instead of trying to guess:

So this makes my argument even stronger. Since both of these point to the exact same file.

But wait, what about that pesky prompt that appears? No user would be fooled into clicking 'OK' and run Windows Script Host! Thankfully when this prompt appears, the default focus is on the 'OK' button which means all the user has to do is hold down enter key and we can trick them into accepting the prompt.

The final proof of concept is as follows:

..and the a video of it in action:

This was my first time reporting through ZDI and I must say that it is a breath of fresh air. The fact that I did not have to deal with vendors directly was a big plus, as I could focus on other things.